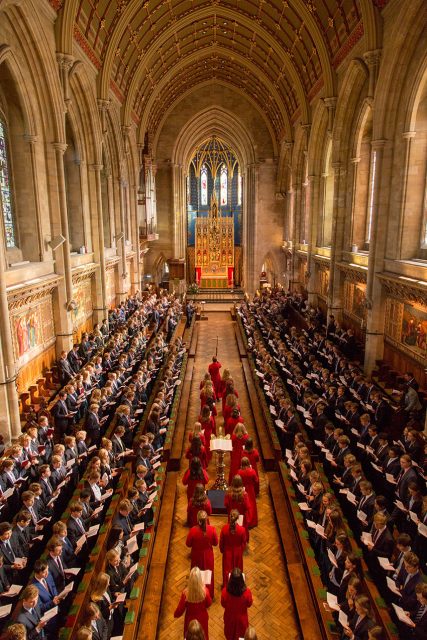 For a 360-degree photograph of the interior of the Chapel, click here.

The venue for the main conference programme, St Michael and All Angels Chapel, at Marlborough College is a masterpiece of Victorian vision and purpose. Its interior is considered to be one of the finest decorative schemes in nineteenth century church architecture, and includes a series of twelve large biblical murals by the late Pre-Raphaelite John Roddam Spencer Stanhope. These depict scenes involving angels, six on the north side from the Old Testament and a like number on the south from the New. Two other artistic features are the Scholars’ Window on the south side, which was designed by Edward Burne-Jones and made by Old Marlburian William Morris, and an external sculpture ‘The Virgin and Child’ by Eric Gill above the west door. Also of interest architecturally are the apsidal form of the East end and the strikingly large reredos in the Anglo-Catholic style, which was gilded much later, in 1951, by Sir Ninian Comper at the same time as he painted the inside of the apse.

Marlborough College, now a co-educational independent school, was founded in 1843 with the prime purpose of educating the sons of clergy. The first Chapel, designed by Edward Blore (1787-1879), was opened in 1848 to accommodate 500 boys. It was, however, a rather plain building and by 1880 the College community had, in any case, grown to over 600. An initial scheme of enlargement by lengthening the walls and raising their height had to be abandoned when it was discovered that Blore’s foundations were insufficiently strong to bear the extra weight and the decision was taken to salvage everything possible before Blore’s Chapel was completely demolished in 1884. The new Chapel, designed in the Late Decorated Gothic style by George Frederick Bodley and Thomas Garner, was dedicated to St Michael and All Angels and was consecrated in 1886. Its colour scheme of greens and browns was much loved by Sir John Betjeman, another former pupil at the school for whom the memories of his time there formed a memorable part of his blank verse autobiography Summoned by Bells (1960). 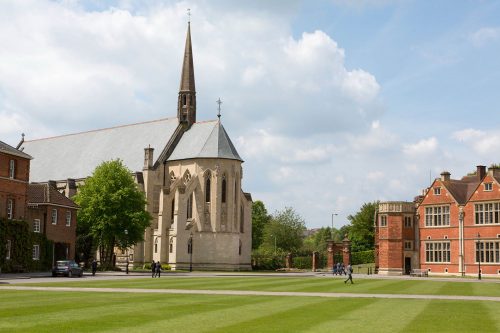 How to get here:

There is ample parking on site.

For public transport, there are various options as detailed on the Town Council website. Marlborough’s nearest train link is Bedwyn Station, in Great Bedwyn (a 20min drive away, though taxis should be booked in advance, or 30min by local bus). From London Paddington there are regular direct connections with National Rail (90mins), and also faster and more frequent routes to Swindon Station (60mins) – from here an easily available taxi would take half-an-hour. National Express coaches also operate direct from London to Marlborough (2.5hrs).

In walking distance from the Chapel are a number of B&Bs and hotels, as suggested here by Marlborough Town Council.

If you are arriving by train and looking to stay near Bedwyn Station, there are plenty of beautiful canal-side places that may appeal: https://www.theharrowatlittlebedwyn.com/accommodation/.

Or for more quiet venues in nearby villages, searchable by distance or other preferences, try www.visitwiltshire.com or www.booking.com.

Alternatively, on site, there are a limited number of budget single or double ‘dorm’ style rooms available. As the conference will be held on an Exeat weekend, there are few staff and pupils on site and therefore no catering is provided with this option, though there are plenty of places to find breakfast in the town. Please contact the organisers by 1st September if you’d like to enquire about this option.